The Bonds are being issued for the purpose of financing capital projects. The Series A Bonds are valid general obligations of the City of Worcester, Massachusetts and the principal of and interest on the Series A Bonds are payable from taxes which may be levied upon all property within the territorial limits of the City and taxable by it, subject to the limit imposed by Chapter 59, Section 21C of the General Laws. Chapter 59, Section 21C of the General Laws is frequently referred to as “Proposition 2 ½ “, and it imposes two separate limits on the annual tax levy of a city or town.

The primary limitation is that the tax levy cannot exceed 2 ½ percent of the full and fair cash value.

For cities and towns at or below the primary limit, a secondary limitation is imposed. This limitation stipulates that the tax levy cannot exceed the maximum levy limit from the prior fiscal year by more than 2 ½ percent subject to certain exceptions for new construction and revaluations.

Worchester maintains its tax levy below the primary limitation. The City currently has roughly $10 million in unused levy capacity and could raise its tax levy by that amount without the need to obtain a voter-approved override of the “Proposition 2 ½” limitation.

Below is a summary of the City’s tax levy history. 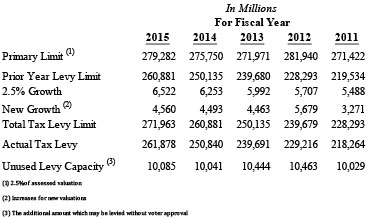 A more in-depth discussion of Massachusetts tax levies can be found on page A-30 to A-35 in the offical statement of the City’s Series 2015A Bonds.