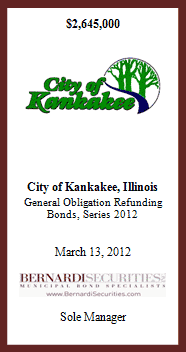 The City of Kankakee, Illinois successfully completed a $2.645 million general obligation refunding transaction on March 13, 2012. Located 60 miles south of Chicago in the northeastern section of Illinois, the city has a population of approximately 28,000. The bonds were issued to advance refund a portion of the city’s outstanding general obligation library bonds, Series 2003B, which were originally issued to finance the acquisition of a new space for the city’s public library. The refunding generated an estimated net present value of 8.087%, saving the city roughly $214,000. The bonds are rated “A” by Standard and Poor’s.