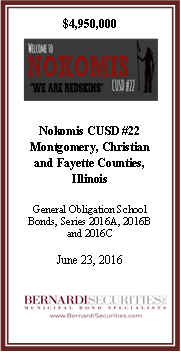 The Nokomis Community Unit School District #22 which encompasses parts of Montgomery, Christian and Fayette Counties in Illinois, successfully issued $4,950,000 General Obligation School Bonds, Series 2016 on June 23, 2016.  The bonds were issued for the purpose of financing multiple District facility improvements.  The improvements include roof repairs, HVAC repairs and improvements, plumbing upgrades and adding additional educational spaces.  The Bonds were rated “A” (Stable Outlook) by Standard and Poor’s and insured by Assured Guaranty Municipal.  The Bonds were issued in three series.  The 2016A Bonds currently refunded debt certificates that the District issued earlier this year.  The 2016B Bonds financed Health Life Safety projects as approved by the Illinois State Board of Education.  The 2016C Bonds were issued as Working Cash Bonds with the funds to be used for capital projects within the District.  The District was able to reduce the overall costs of issuance by issuing the three series at once versus issuing them all separately at different times.  The Bonds will be repaid over a twenty year maturity with a true interest cost of 3.045%. The Bonds are to be repaid from the General Obligation ad valorem taxes levied against all of the taxable property located in the District, without limitation as to rate or amount.