June was a very volatile month for the markets, triggered by concerns that the Federal Reserve Bank will begin tapering its easy-money programs of quantitative easing and near-zero-percent overnight lending rates.

Bonds, equities, currencies and commodities were all whip-sawed with indiscriminate selling pressures. Bond mutual funds for instance, saw a record $70.8 billion withdrawn during the month, nearly double the amount pulled out of bond funds at the height of the financial crisis in October 2008. The benchmark, 10-year Treasury Note yield climbed to as high as 2.66% on June 24th, up from 2.01% on May 24th —a 32-percent increase in just 30 days and the highest yields in two years.

Although not to this magnitude, we’ve seen this type of volatility before (see chart below). Rates climb and then fall back as traders and investors digest economic news and interpret what was meant by Fed chairman, Bernanke and other Fed officials. A trend is developing though, in that each new peak and subsequent valley is at higher rate levels than the last cycle. This normalization of rates is likely to continue as the economy shows signs of recovery and Fed intervention or support is reduced. 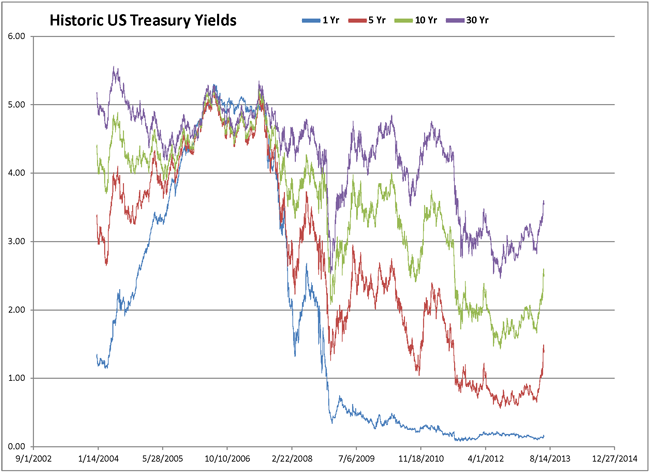 During the month of June, municipal rates were impacted to almost the same degree as Treasuries. According to the Thomson-Reuters Municipal Market Data (or MMD) Table, yields on 10-year, “AA” rated, municipal bonds climbed from 2.15% to 2.80%–a 30-percent move from May 28th to June 28th. While not unprecedented, a move of this magnitude has not been seen since early 2010, shortly after Meredith Whitney predicted municipal defaults would hit hundreds of billions of dollars. Predictions that have proven to be far from reality.

Despite rising rates, municipal issuance remained strong during in June and buyers were rewarded with the highest yields in more than 18 months.

The State of Illinois offered one of the largest issues of the month with a $1.3 billion G.O. bond deal which sold with yields about 1.50% or 150 basis points higher than, top-rated issues were asked to pay. This was a direct result of the State Legislature’s continued failure to address the underfunding of its pensions, which at last count exceeds $100 billion. The extra interest demanded by investors will cost the residents and businesses of the state roughly $130 million in additional interest expense over the deal’s 25 year life.

It is expected that July will bring continued volatility, although not of the magnitude seen in June. We remind you that despite its nature, your bond portfolio need not be a static investment. Increasing rates should bring opportunities for tax-loss swapping that hasn’t been readily available for the last few years. We thank you for your continued confidence and if you have any questions, please contact your Bernardi Securities’ Investment Specialist.

A Mixed Message From The Fed