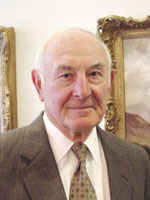 Edward Bernardi has been in the municipal bond industry for over 50 years. Ed co-founded Columbian Securities, Inc. in Chicago in 1961, serving as president and CEO until 1984 when he sold his interest and founded Bernardi Securities, Inc.

Ed is a former board member and president of the Union League Club of Chicago, past chairman of the Lake Forest Park District, past president and life trustee of the ULC Boys & Girls Foundation. He has also been an officer and board member of numerous municipal bond industry associations.

Ed has written extensively on municipal bond topics. Most recently he has published “Kill the Devil Twice” a sequel to his first work of fiction entitled “The Reluctant Patriot.”