The municipal bond market’s behavior in 2013 could be summed up by the old saying that the Chinese word for “crisis” – wēijī – is actually composed of two characters representing “danger” and “opportunity.” John F. Kennedy is credited for popularizing this concept in a 1959 speech, and it has since become a staple of motivational speakers looking to inspire their audiences to seize the opportunities that appear in the midst of uncertain times.

This is a great saying, but a little research shows that this is another one of those stories that is a little too good to be true. Wēi does roughly translate to danger, but the Chinese character jī actually is closer in meaning to “crucial/critical point” than opportunity.

In that context, however, wēijī could be an even more appropriate term to use when considering the year 2013:

Historians indeed may look back on 2013 as having been a crucial point for municipal debt investors. On the other hand, we at Bernardi Securities see it as a time when the fundamentals of our investment process and philosophy – separate account, professionally managed portfolios utilizing rigorous credit analysis and a disciplined adherence to a laddering strategy – have become ever more important to our clients.

In short, we think that this possible crucial point offers real opportunity to the committed municipal bond investor.

Interest rates – Are they finally moving (and staying) up?

Ever since the Federal Reserve embarked on its unprecedented quantitative easing program to force interest rates down to record-low levels, fixed income investors have been awaiting the inevitable return to more normalized levels. 2013 could possibly have been the turning point, as the U.S. economy has finally exhibited signs of breaking out from tepid – though sustained – growth.

We have also seen the Fed make its first tentative steps to ease its flood of liquidity into the market, via its decision in late December to begin tapering its purchases of longer-term Treasuries and mortgage-backed securities.

The yield curve has responded accordingly, as investors anticipate higher rates sooner. This is demonstrated by the steepening of the yield curve, with the tax-exempt municipal curve graphed below. Short term rates are still anchored by the Fed, though longer-term rates have risen as the market anticipates higher growth and inflation – hence, higher yields – in the future. 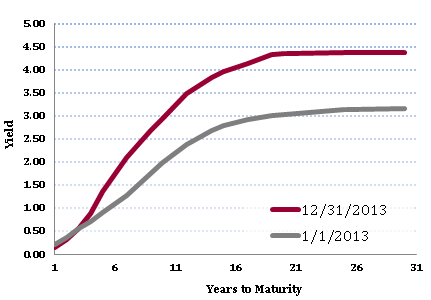 The obvious question is whether this is the start of a sustained rise in interest rates. Our answer is – we don’t know and we will not speculate. We do not make aggressive interest rates bets, and we certainly have seen a number of very smart analysts prematurely call an end to this low rate environment.

Furthermore, we have seen a number of 50 to 60 basis point increases in rates since the 2008 financial crisis, only to see subsequent rallies in the bond market. Indeed, an unexpectedly weak employment report this month has led to the 10-year Treasury moving back towards 2.75%, which is roughly where it was back in August.

This reminds us once again of one of the strengths of the laddered bond portfolio for the committed municipal bond investor – it takes fear (or overconfidence, for that matter) out of the equation, and replaces it with a disciplined approach to investing. You may recall the December 11th perspective and strategy discussion written by one of our vice presidents, Jeff Irish. Jeff discussed the cost of waiting for rates to rise while money stagnates in near zero-percent money market or ultra short-term bond funds. Investors waiting on the sidelines for an increase in market yields are losing more and more of the “time value” of their money. In the meantime, the owner of a laddered municipal bond portfolio has been receiving a stream of income.

It pays to remember that we are now approaching the sixth year of a zero interest rate environment. We don’t know if any of us could have foreseen this back in September 2008 when Lehman Brothers filed for Chapter 11 bankruptcy. It is also worth noting that Federal Reserve officials have made it clear that while the Fed is beginning to taper longer-term bond purchases, they expect short-term rates to stay near zero for at least a couple of more years.

In light of recent history and continued uncertainty, we maintain that a commitment to the bond ladder gives the investor the best means for seeking income.

The stampede from bond funds and ETFs

As you well know, one of the fundamental rules of fixed income investing is that the prices of existing bonds decline as rates increase. 2013’s decline in bond prices translated into higher yields in the intermediate and longer-term markets. Tax-exempt municipal bonds were affected along with taxable securities, as reflected in the 2.6% loss recorded by the benchmark Barclays Aggregate Municipal Bond index.

The average general and insured municipal bond fund lost 4.1% in 2013, while the iShares National AMT-Free Muni Bond exchange traded fund (MUB) lost 3.44%. Such figures spurred withdrawals from municipal bond mutual funds and sales of muni ETFs in 2013, which forced such funds to sell bonds into a declining market in order to raise cash for redemptions. This in turn led to further weakness in the market and a divergence of fund and ETF prices from net asset value (NAV).

On the other hand, almost all of our separately managed, laddered portfolios did better than the Barclays index, and avoided most of the volatility seen in the mutual fund and ETF marketplaces. As noted in our August 28th piece entitled Outperforming the Madness of Municipal Bond Fund Herds, the separately managed bond account allows for greater control at times such as these. It allows the investor to avoid being swept up in rush of the crowd to the exits; instead, he or she has the ability to select or remove specific bonds from their portfolio, and the timing of such actions. This is particularly helpful when harvesting losses to shield other investment income and capital gains.

The holder of a laddered account actually finds a silver lining in rising rates, in that maturing securities now can be reinvested at higher yields, while soon-to-mature securities can be swapped into higher-yielding longer-term issues. This is one of the most important benefits of this structure for the investor looking for income. Once again, the bond ladder offers great opportunities to the committed municipal bond investor.

Detroit and other discontents

Detroit’s seeking protection from its creditors via a Chapter 9 bankruptcy filing was probably the biggest headline news of the year. We were not especially surprised to see this happen, but what was surprising was Detroit’s emergency manager’s declaration that general obligation debt holders had no priority on claims. In essence, such debt holders were told to get in the same line for payment with everyone from city employees to the City Hall coffee vendor.

If this stands, it would violate all understandings of how general obligation debt is prioritized in a bankruptcy filing. Our president, Ronald P. Bernardi, wrote an extensive piece on this on December 20th that is well worth reviewing again. Among the points he makes is that some national precedents could be set by the eventual rulings of the U.S. Bankruptcy Court overseeing Detroit’s filing.

Investors have speculated on which other issuers may experience similar distress. An August 26th front-page Barron’s article detailed the weak credit profile of the commonwealth of Puerto Rico, leading to a significant selloff of its debt. The pension funding woes of the state of Illinois also have come under increasing scrutiny. These problems have not only put pressure on Puerto Rico and Illinois state issues, but have weighed on the municipal market overall.

On the other hand, this has reinforced the importance of another key part of the Bernardi process – a rigorous attention to credit quality. Our managed accounts have never invested in Detroit, and we have steered clear of Illinois state debt and Puerto Rico issues for several years. Paying close attention to the three pillars of credit research – deal purpose, deal structure, and underlying credit quality – has enabled our clients to avoid both widely publicized credit issues and others less famous, but no less severe.

Bernardi’s credit research team also offers opportunities as well as protection for our investors. As noted, we have avoided Illinois state debt for some time; however, there are many well-run municipalities in Illinois whose debt trades at higher levels due solely to being located in this state. Our knowledge of such municipalities allows us to invest in this debt and capture these higher rates for our clients, while maintaining a vigilant eye on their ongoing finances to make sure that both interest payments and principal are protected. We consider our clients’ portfolios as their “mattress money,” and always act with that in mind.

Moving on, and benefitting, from 2013

2013 was a challenging year for the fixed income market, both taxable and tax-exempt. The upwards shift in the yield curve, large and continuing withdrawals from municipal bond funds and ETFs, and the headlines coming out of Detroit and other pressured issuers can leave the investor justifiably wondering if the municipal bond market is indeed in dangerous territory (or wēi). Particularly when looking at the increase in intermediate and long-term rates during the year, the issue of whether we are at a crucial or critical turning point (or jī) for the market can be vigorously debated.

On the other hand, the Bernardi commitment to separate account, laddered portfolios offers an opportunity to those committed to seeking income, and especially tax-exempt income. Almost all of our portfolios handled the decline in the municipal market better than the primary Barclays index or the average mutual fund or ETF. The laddering structure means that our clients have bonds that will soon mature and can be reinvested at new, higher yields. Finally, our credit research process helps our investors avoid pitfalls like Detroit, while finding quality issuers offering above-market yields.

Bernardi Securities is now entering its 30th year of turning potential “danger” into “opportunity” for our clients. We remain committed to doing so for the benefit of our clients in the years to come.

Thank you for your continued confidence in our bond portfolio research and management process. Please always feel free to contact us if you have any questions, or would like us to review your portfolio with you.

The Problem with Waiting for the “Fed” to Raise Rates