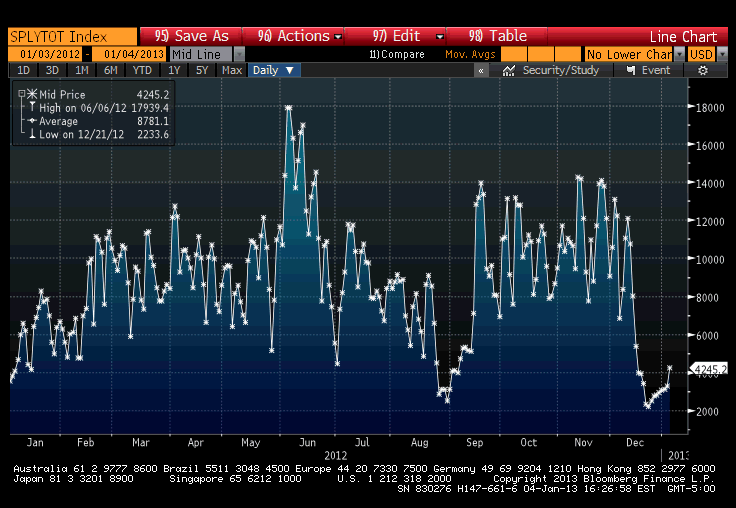 Finally, bond yields moved higher in December reversing the predominant 2012 trend line and reminding many that losses are possible even in Mr. Bernanke’s contrived bond market utopia. Centuries ago the bard from Avon opined (as did our own January 2004 commentary) “Sell when you can, you are not for all markets”.

For a man that never traded bonds, William Shakespeare understood a basic bond market tenet: at certain times, selective selling often is a sensible strategy. When it made sense in 2012 and especially during the final months of the year our portfolio management process employed this strategy for many mature and fully invested client portfolios. In December, as attractive investment opportunities became more plentiful, portfolio selling was overshadowed by investment activity.

Generally, municipal bond prices declined in December by the steepest amount in two years and, on a percentage basis, by a greater degree than treasury bond price declines. The sharp price decline, in part, was set up by the dismally low yields reached in late November (a near four decades low). We view December’s price decline as a needed market adjustment; municipal bond yield ratios relative to taxable bond yields had become too expensive during November.

December’s bad news for bond portfolio valuations aside, 2012 proved to be a solid year for most bond investors, a continuation of the multi-year bond market rally. Annualized 3%-4% total returns for non-taxable, intermediate and long term municipal bond portfolios occurred. Those are attractive returns compared to the present day near 0%- 2% short/intermediate term U.S. Treasury bond universe.

The California trio of Chapter 9 bankruptcy filings (Stockton, Mammoth Lakes and San Bernardino) all within 6 weeks of each other this past summer was big news in 2012, but did nothing to slow the mid- summer bond market rally.

In December, the California Public Employee’s Retirement System (Calpers) and various unions representing city of San Bernardino employees repeated their objections to the Chapter 9 filing and argued in court it was illegal for the city to defer pension payments for policemen, firefighters and other city employees. Calpers argued San Bernardino cannot defer its pension payments to the fund while in bankruptcy and that the deferral is unfair since Calpers is still required to pay city retirees defined benefits of almost $ 4 million each month. Notably, Calpers views the city’s pension obligations as senior to other unsecured debts (including municipal notes, certificates of participation and certain unsecured bonds).

The City of San Bernardino and debt holders have a different opinion on this issue.

We have stated before we are not attorneys and therefore we will leave it to the courts to decide these important matters. However, recent comments related to this topic made by our friend and well-respected bankruptcy attorney, James Spiotto in a December 5th, edition of the “ Bloomberg Brief” were not lost on us: “A defined benefit that isn’t capable of being funded is not a defined benefit- it’s an illusion.”

Late in December, U.S. Bankruptcy Judge Meredith M. Jury ruled in favor of the City of San Bernardino and against Calpers and city unions allowing it to continue deferring pension payments while in Chapter 9. Judge Jury stated forcing pension payments “would be the death knell” for the city at this time.

We are certain this is not the end of this matter, but take some heart in the Judges’ sensible and logical ruling on this specific issue.

1966 brought us the iconic rock band “The Mamas and the Papas”, their hit song, “California Dreaming ” and its musings about brown tree leaves, grey skies and a winter day.

We are uncertain as to the meaning of the song’s lyrics and wonder if, perhaps, they serve as bond market metaphors for the general state of California’s present day municipal finance.

We are certain of two things:

The outcome of the California Chapter 9 filings will greatly determine, in our view, if California skies, indeed, are grey.

We will have to wait and see if reason and common sense will prevail.

Planning for the future based on the results of the past year may seem logical, but hardly assures we will be masters of the coming year. That said, here is how we see 2013 shaping up and offer some thoughts in anticipation of the year ahead:

We continue to look for these opportunities for our clients in the new year.

Thank you for your continued confidence.