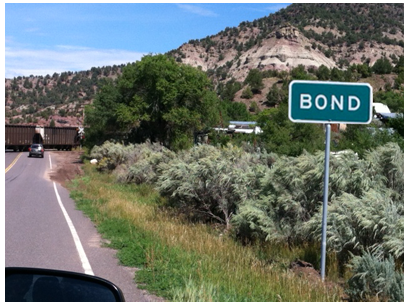 The family vacation photo that made its debut this past December, “Will Detroit turn BOND upside down?”, returns today, right side up.

Last week Detroit reached a settlement with three bond insurers over the treatment of its unlimited tax general obligation bonds (UTGO) agreeing to pay this group of creditors 74 cents on the dollar of the $388 million owed.  The remaining 26% surrendered by UTGO bond creditors will be assigned to support various pension plans for city employees.  Outstanding insurance policies on the UTGO bonds remain in effect ensuring full payment of debt service to investors as originally scheduled.  The city’s bankruptcy plan prior to this settlement offered as little as 15 cents on the dollar to the UTGO creditor group.  It  will be amended to reflect this settlement and is subject to approval by U.S. Bankruptcy Judge Steven Rhodes.

BOND, Right Side up?

According to the final official statement issued and approved by City of Detroit, Michigan Series 2005-B bond issue, “The Bonds are full faith and credit unlimited tax general obligations of the City duly authorized by the City’s voters and secured by a pledge of the full faith and credit of the City. The City is authorized and required to by law to levy and collect ad valorem taxes without limitation as to rate or amount upon all taxable property in the City to pay the principal of and interest on the Bonds when due.”

Despite the obvious clarity of the text, City of Detroit emergency manager Kevyn Orr, until last week, claimed the Series 2005-B UTGO bond issue (and other similarly structured issues, as well) was “unsecured” — he viewed it’s security no different than the unpaid coffee vendor’s bill. As we wrote last December, there is a great deal riding on Detroit’s workout plan and the need for it to treat UTGO and LTGO bondholders equitably and differently than other creditors.

In our December market update, we suggested the city implement a distribution “waterfall structure” and establish a hierarchy delineating the order and percentage priority in which funds are to be distributed to various classes of debt holders. Such an approach helps ensure that different types of creditors receive the priority of payment they deserve.

Last week’s agreement, if approved by Judge Rhodes, is a significant positive step for Detroit and moves the city in the direction we suggested months ago. We are heartened by Mr. Orr’s about face and believe it is exceptionally important to Detroit’s future. His motivations for changing his position are unknown to us and we give him great credit for doing so. Below, we offer our conjecture as to why he agreed to quintuple his offer to UTGO creditors:

We are hopeful Mr. Orr reaches a similarly equitable agreement with LTGO creditors quickly. Settlement with this creditor group is important for Detroit. Any potential settlement will be less than the 74 cents on the dollar agreed to with UTGO creditors consistent with a “waterfall structure” solution. But, in our view, it should be substantially greater than the 15-20 cents payout as cited in the city’s filed plan. This creditor group — and others too — have millage dedicated to their security interest and should be treated differently, better than creditors lacking this claim on millage. The city can justify to the Court paying a higher rate of recovery to this group. An equitable agreement with this creditor group will strengthen Detroit’s access to capital markets in the future. Importantly, it will also help lift the undeserving pall currently hovering over much of the LTGO debt issued by municipalities across Michigan.

Still “Waiting for Godot” in BOND

Samuel Beckett’s 1953 tragicomedy depicts the story of two homeless men, Vladimir and Estragon, who wait endlessly for someone named Godot. They are unsure who he is and what he will bring them. They are hopeful when they meet him he will have a solution to their plight. Godot never arrives.

Our metaphorical BOND has endured its own frustrating version of “Waiting for Godot” in recent years, too. Bankruptcy filings in Stockton, San Bernardino and now Detroit have failed to answer a significant question overhanging the market — Are voter approved, unlimited tax general obligation bonds “secured”?

Mr. Orr claimed otherwise, until last week. Bond investors, insurers and other market participants strongly disagreed with him. The settlement means Mr. Orr has changed his mind and now agrees with this group. This is a fine development for Detroit — and other Michigan bond issuers and investors —  in part, because it helps to debunk the notion voter approved general obligation bonds are “unsecured”.

But the agreement between Detroit and UTGO creditors, if approved, obviates the need for Judge Rhodes of having to answer the key question. For many investors holding UTGO and LTGO bonds issued by Michigan municipalities, this is a disappointing and frustrating outcome of last week’s agreement. Clarity requires singularity oftentimes and this question is one such case. Similar to what Vladimir and Estragon feel as they wait in vain for Godot, many investors wish the question would be answered in a court of law.

Until this question is definitively answered in a courtroom or by state legislatures, certain issuers will continue to use the lack of clarity as leverage. They will dance around the concepts of “willingness” and “ability” to pay debt service on their bonds forcing investors to litigate to protect their interests. This dynamic creates market uncertainty and investor unease. Both are bad for the market, issuers and investors.

The question at hand needs to be answered by a thoughtful court. It appears Judge Rhodes will not be presented with the opportunity to answer it. And it appears Godot will not be arriving anytime soon to answer the question either.

The Problem with Waiting for the “Fed” to Raise Rates