Following Janet Yellen’s recent testimony, many investors may just want to wait for Federal Reserve policy makers to raise interest rates before committing money to the bond market. After all, the fed funds rate has been held in the 0% to 0.25% range for years so rates 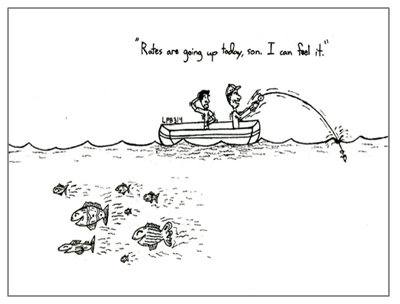 must go up, right? The answer is perhaps, but interest rate timers may have wasted four years waiting to catch a bigger fish – and just missed it. Most of the hike in interest rates that investors have been waiting for may have already happened.

In just the past 15 months, the yield on the benchmark, 10-year Treasury note has climbed from 1.65% to 2.71% where it stands as of this writing. That’s a 106 basis point increase in yield at the same time the fed funds rate has remained unchanged.

Shown below is an analysis of the past four Fed credit tightening cycles along with the resultant yield for the 10-year Treasury note during the same period. You will notice that the fed funds rate actually ended up higher than the yield on the Treasury in three of the four cycles.

*Fed funds rate figures for this period are approximated as Federal Reserve decisions were not officially announced at the time.

It is important to remember that the Fed – aside from the quantitative easing policies, which are now being tapered – is not usually buying or selling longer dated bonds. Traders, investors and other market participants will generally dictate the yields on long bonds. Pricing is based in large part on future inflation and growth expectations. As the economy has shown signs of recovery, these participants have been driving the yields of long bonds upward to compensate for the expected erosion of net return that is caused by inflation.

When the Fed does start to raise the fed funds rate, a perverse thing, as far as those on the sidelines are concerned, usually happens as evidenced by the preceding analysis – the rates on long-term bonds peak and then start to fall. This happens because the prime rate is tied to the fed funds rate, which is directly tied to almost all forms of consumer and most business borrowing. When these rates go up the cost of borrowing goes up, which slows the economy. A slowing economy is usually welcome news for bond investors because costs of goods and services tend to stabilize or even fall, which preserves the buying power of fixed income investments.

The rising-rate advantage of individual bonds

The reason many typical, buy and hold, municipal bond investors may not be buying longer-term bonds right now is because they have been scared into thinking that the value of their investment will decline sharply if interest rates rise. It is the dreaded total return argument.

Calculating the cost of waiting

Here is an illustration to bring this all home. Assume one has $100,000 available to invest. Let’s say you can put the money in a long-term bond with a 4.00% coupon, priced at par or park it in a one-year bond yielding 0.50%. After a year, the investor in the ultra-short bond has received $500 while the long-term buyer earned $4,000. The short-term investor retains their options but at a steep cost.

Let’s say the ultra-short investor guessed correctly, though, and after one-year he or she is able to invest in a bond yielding 5.00%. The 5.00% bond generates $1,000 more interest annually than the 4.00% bond but it will take about four years for the short-term investor just to break even with the investor who put his money into the 4.00% bond today.

If the investor is right about the direction of rates but wrong about the size of the move – for instance, one is only able to invest at 4.75% – it will take about five years for him to catch up. If rates remain where they are, or decline, the investor will never catch up.

We are not advocating abandoning your current investment parameters to buy 30-year bonds. Rather, stick to your existing ladder and forget about trying to time the market. There’s a hefty price to pay for thinking you can predict the unpredictable.

As always, please contact us if you have any questions, or would like us to review your portfolio with you.

Detroit settles with UTGO creditors – BOND is Right Side Up! Still “Waiting...
Scroll to top