Our descriptive Three Pillars is an over generalization of our approach to municipal credit analysis. When we look under the hood of each bond, numerous variables come into play, including: State statutes, taxing capacities and limits, the real or perceived unsecured status of the lien, political trends, and many others. This is what makes investing in municipal bonds laborious and nuanced – but fun – and financially fulfilling for your portfolio when the work is done effectively. It also demonstrates the importance of active management in a market where not all bonds are created equal.

Another variable that impacts our opinion of a credit, and its relative trading value, is the long term demographic trends of the municipality or surrounding region. The U.S. Census Bureau [1] provides great insight into current trends.

It is no surprise where most of the growth is occurring: Texas, Arizona, California and Florida. Actually five of fifteen the fastest growing cities (above 50k people) are located in Texas.

The southwest and snowbird states are not the only areas that have solid demographic trends. Take Ankeny, IA for example, which experienced the third fastest growth rate in the nation. Ankeny is a suburb of Des Moines and the current population of 56,764 is up 11,182 since 2010. It has more than doubled the last 15 years. Murfreesboro, TN and Mount Pleasant, SC are two other notables that have benefited due to their proximity to budding cities. Murfreesboro is a Nashville suburb – which is now the largest city in Tennessee after surpassing Memphis- while Mount Pleasant, SC abuts Charleston.

A city experiencing explosive growth needs to be looked at closely, however. Sometimes the level of growth is a temporary factor, while politicians’ growth assumptions are more permanently baked into projections and fixed costs. Should growth subside, the resulting structural deficit is not always easy to cure politically and financially.Chicago’s pension liability is a recent and relevant example of how projections do not always hold up and the resulting structural inadequacies that follow inaccurate projections. Due to underfunding, generous benefit structures, and subpar investment returns, the city is faced with a significant liability. Also, it is the only city in the largest 15 to lose residents last year – losing 2,890 people. 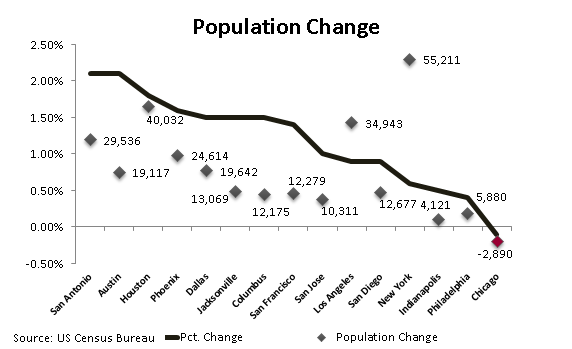 Of the sixty largest cities, seven lost population. Five of the seven are located in the Midwest. 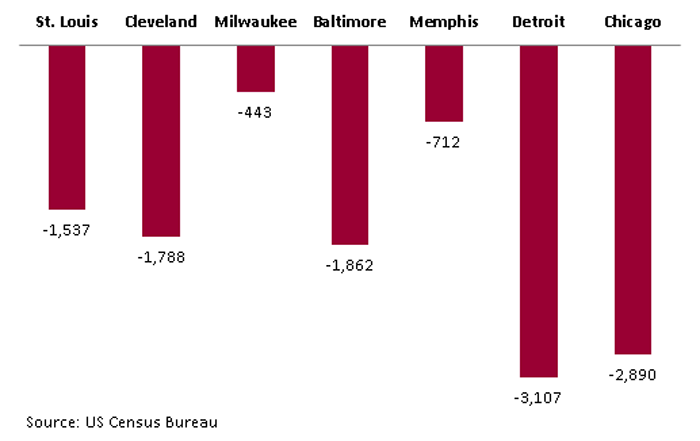 Detroit experienced over 40 years of 1.70% annual population decline[2] before it faced bankruptcy in 2013. This demonstrates that the trends are important, but not necessarily a near-term worry for cities that have conservatively managed their budget. For cities like Chicago – and even still Detroit – population decline will add further pressure to already stressed financial situations.

That being said, the other five cities that experienced population decline last year are all approved credits. Though one aspect (population trend) of the “Underlying Credit Quality” Pillar is weak, these cities have been able to balance their finances. We also look to the other two pillars (structure and purpose) to provide relative strength due to weakness in the demographic trends.

I hope you find this commentary helpful and if you have any comments or questions, please do not hesitate to contact your Investment Specialist or Portfolio Manager.