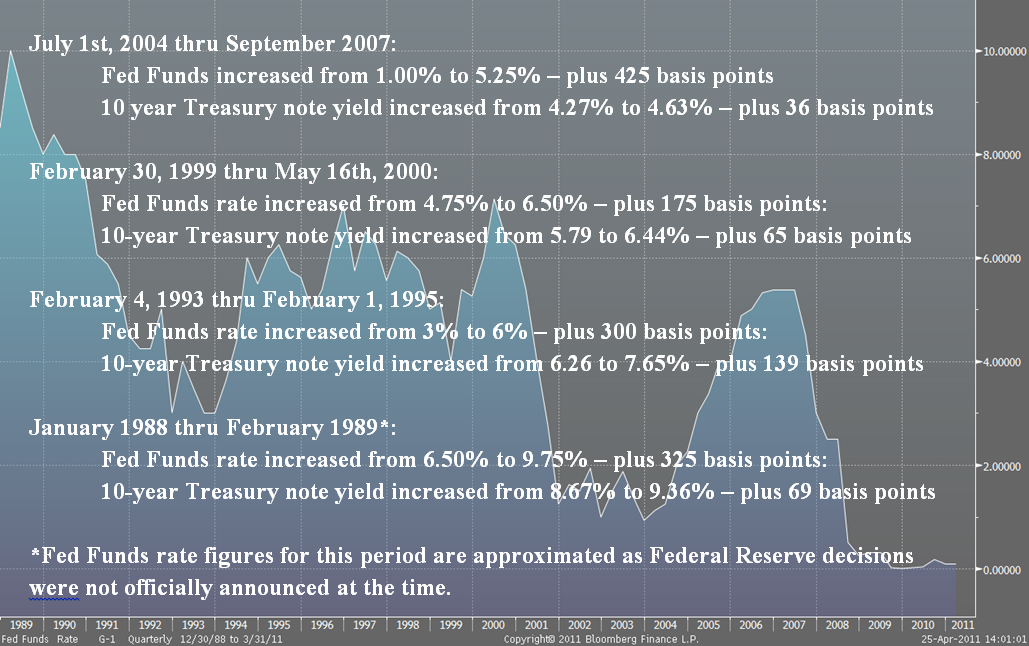 What Will it Mean to Municipal Bonds in 2011 and Beyond?

As the economy expands, it is becoming clearer that we are nearing the end of the “easy money” policy that the Federal Reserve has pursued over the past few years. So what can we expect once the Fed starts raising interest rates?

It’s important to remember that when we’re talking about the Fed raising interest rates, we’re talking about the very short, Federal Funds rate and discount rate. While linked and influential, these short term borrowing rates do not control the yields on longer-term bonds, which (absent contrived programs like QE1 and QE2) are influenced by traders, investors and other types of market participants.

The Fed may move aggressively.
Depending on what emerges later this year and into 2012 in terms of economic recovery, inflation and job growth, the Federal Reserve may be very aggressive in hiking these rates. Unlike the Alan Greenspan led Fed and its measured, 25 basis point hikes or cuts, the Ben Bernanke led Fed has shown a proclivity to act much more ambitiously.

Under Bernanke, in the roughly 16 months from late September 2007 to early December 2008, the Federal Funds rate was slashed from 5.25% to zero to combat the worst recession in generations. When the Fed does begin hiking rates, why should we expect a timid response if they feel it necessary to hike more assertively?

The past four Fed tightening cycles & municipals.
When the Fed does raise the Federal Funds rate, an interesting and perplexing thing often occurs, the yields on longer-term bonds like the 10-year Treasury Note, will peak and then start to fall. This happens because the Fed Funds rate is tied to the prime rate, which is directly tied to almost all forms of consumer and most business borrowing. When these rates go up the cost of borrowing goes up, which slows the economy. A slowing economy is usually welcome news for bond investors because costs of goods and services tend to stabilize or even fall when the economy slows, which preserves the buying power of fixed income investments.

Shown on the reverse of this letter is an analysis of the past four Fed credit tightening cycles along with the resultant yield for the 10-year Treasury note during the same period. You will notice that the ultra-short, Fed Funds rate actually ended up higher than the yield on the T-note in three of the four cycles!

What does all this mean?
If your portfolio is short – i.e. a five year, laddered time-frame or shorter – an increase in Fed rates should start boosting short-term bond yields. However, if you have a longer-term ladder, stick to it. If you’ve been waiting for higher rates on the longer end of the yield curve, your wait may already be over. In just the past six months, the yield on 10-year, AA rated municipal bonds has climbed 64 basis points while 20 year, AA rated yields have climbed 94 basis points!

“One Year Later – What is Different Today?”