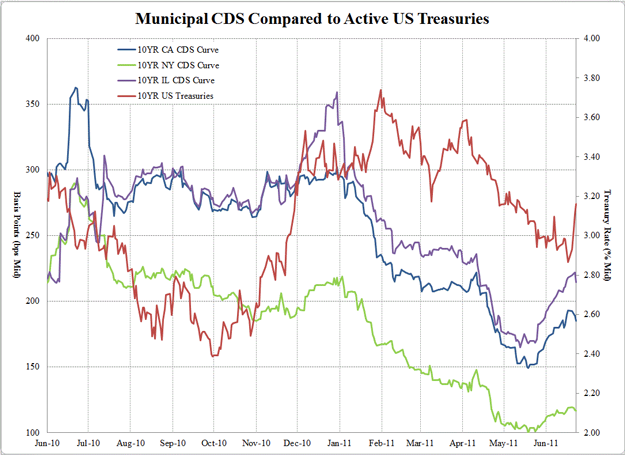 In this commentary, we will summarize where municipal credit quality has been, where we believe it is today, and what our clients should expect over the near term investment horizon. The municipal market began the year with a tumultuous first quarter, but managed a trend reversal during April and May before leveling off in June. Bond price gains were driven primarily by investors who placed their trust in credit fundamentals and recognized the values left behind by the abrupt municipal bond fund sell off in late 2010. The exodus of many investors from funds was motivated mainly by concerns that fiscal challenges facing municipalities would lead to “sizeable” bond defaults this year. We disagreed with that extreme view and, as we will highlight in this commentary, current data supports our opinion.

Recently, the robust rally has tapered off despite a continuing decline in new long term municipal bond issuance. As part of our research we tracked the monthly average dollar price of the Bond Buyer Municipal Bond Index which is based on standardized prices for 40 large, long-term municipal bonds with an average maturity of 28 years. The average monthly price rebounded from a low of $92.07 (YTM of 5.749%) in January to $95.18 (5.647%) in April and $98.76 in May (5.42%). For June, the index’s average monthly dollar price reached $100.98 with yield-to-maturity dipping to 5.21%. The index’s smaller gain from May to June indicates a slowing rally as well as suggests some possible near term price stability.

More concisely, in our view there were two major factors supporting the recent rally:

1. Investors that rode the wave out of municipal bonds returned to the market as positive economic news dwindled and skepticism increased over sustained value growth in the equity markets.

2. Much of the speculation regarding significant municipal defaults occurring in 2011 simply has not materialized. Our view on this topic is validated, in part, by municipal bond default data provided through Municipal Market Advisors. The data shows that through June 30th, there were $9.6 billion of outstanding municipal bonds in which bondholders were missing a payment. This equates to 0.26% of the estimated $3.7 trillion municipal market1.

Further evidence supporting municipal credit quality, at least from a macro level, is shown in the graph below. The graph highlights the cost of credit default swaps (CDS) on 10 year bonds of three states: California, Illinois, and New York compared to rates on 10 year U.S. Treasuries. Credit default swaps represent the cost of purchasing insurance against a security’s default. Essentially, the greater the perceived risk of default, the greater the costs to provide insurance, as concerns dissipate — prices fall. The cost of default insurance on the three states has declined considerably since the beginning of the year, particularly relative to the movement in Treasuries. This suggests investors have become less convinced that these municipal credits will default; instead investors have turned their attention to the challenges of reducing the federal deficit and to a greater degree the national debt ceiling, as evident from the rise in treasuries. Furthermore, the chart also suggests that when a state or municipality shows a willingness to raise taxes or curb spending, the market responds quickly and rationally. Notice how the CDS market responded to the state of Illinois after it raised the state income tax 66% in January 2011. On January 6th, 2011 the cost of insuring Illinois’s debt topped out at 359 basis points, only to fall 62 basis points a week later once the legislators had formally signed the tax increase. Since January 6th, the cost of a CDS on a 10 year state of Illinois bond has fallen 40.2% to 214.75 basis points.

Moreover, the 2011 Q:1 report on state and local government tax revenue released by the U.S. Census Bureau indicated tax revenues for state and local governments were up 4.7% over Q:1 2010. This marks the sixth consecutive quarter of positive year over year growth. Individual income taxes, general sales taxes, and corporate income taxes lead the way with year over year increases of 12.0%, 5.8%, and 6.3%, respectively. These tax increases in concert with expenditure reductions are the key factors in balancing budgets. In fact, on the heels of the Bureau of Labor Statistic’s May jobs report, an Associated Press story from June 6th, noted that “more than 467,000 state and local government jobs have vanished since the recession officially ended in June 2009, including 188,000 in schools.”2 To a credit analyst, these figures are bittersweet, they are certainly undesirable from an overall economic perspective; however, they suggest that municipalities are willing to make the difficult choices to balance budgets. How deep the cuts will go and for how long will be predicated on the course of the U.S. economy.

Despite a recent downgrade cycle in the municipal market, we expect the improving market sentiment to carry well into the summer. We anticipate headline risk to continue to weigh on the municipal market and its investors, although we surmise the preponderance of hard evidence to the contrary should provide a sufficient counterweight. We believe there will continue to be strong rhetoric from municipal leaders on tax increases and spending reductions, particularly at the local level. The degree to which either will actually occur appears tied to the U.S. economy.

As we have pointed out previously, yields in the municipal market are transitioning away from the very homogenous “AAA-insured” interest rate sensitive environment toward specific idiosyncratic issuer credit risk. While this movement may be a bit unnerving to some municipal investors, it is a development that ultimately will reward those that have carefully followed our three pillars of municipal credit research. Investors willing to accept incrementally more credit risk will be compensated with a boost in yield. Conversely, investors in longer maturities will be rewarded for accepting the interest rate risk.

I invite you to attend our next webinar; we look forward to circulating those details shortly.

The End Is Near

The Effect of a U.S. Rating Downgrade
Scroll to top