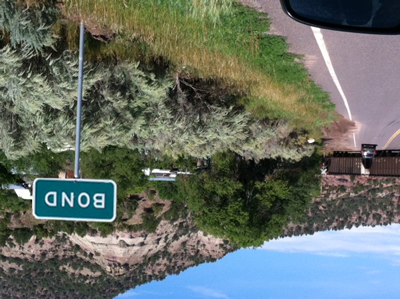 Will the Detroit Chapter 9 bankruptcy turn the municipal bond world upside down? A random vacation photo captured this concern fairly well. With such a big question looming over the market, let’s review the ways in which the largest municipal bankruptcy in our nation’s history may set precedents for municipalities across the country.

The vacation photo worth 1700 words

Bond, Colorado sits at 6600 feet in the northwestern part of the state approximately 135 miles west of Denver. The Colorado River cuts through the town that is home to 183 hardy people. The summers are cool, mild, dry and short; the winters are long and cold. It is both a beautiful and desolate place.

State Highway 131 runs north to south snaking along portions of the meandering Colorado River. A Union Pacific rail line runs parallel to State Highway 131 before taking a hard turn crossing it in Bond.

This past September I spent some unscheduled time in Bond, forced to stop at the intersection of Highway 131 and the Union Pacific rail line. A combination of flashing red crossing signals (there were no gates) and a rumbling, seemingly endless freight train pulling a lot of Colorado coal allowed me to take in Bond for about 10 minutes.

Instead of passing the time counting freight cars I took in the vast landscape, the nearby Colorado and noticed a photo opportunity. I asked my trusted co-pilot of these last 29 years, my wife Beth, to lean out the window and take a photograph.

Beth snapped the photo and forwarded it to me electronically. It arrived on my desktop in an inverted state and I knew immediately I could use it somehow. Today, the photo makes its illustrative debut.

Detroit, Michigan lies 1400 miles to the east of Bond. What transpires in Motor City in the coming months may very well turn the municipal bond world upside down.

Earlier this month U. S. Bankruptcy Judge Steven Rhodes ruled that Detroit is eligible to enter into Chapter 9 bankruptcy and pension benefits are not entitled to any heightened protection in municipal bankruptcy. His ruling means the city of Detroit government’s workers and retirees cannot count on state constitution guarantees to protect pension benefits. Practically speaking, the ruling serves as an invitation for creditors to reach a settlement with the city and hopefully will lead to meaningful out of court negotiations on pension reform. His ruling came in spite of vigorous objections filed by union and retirees’ lawyers. Bond investors and bond insurers did not object to the city’s bankruptcy filing.

Judge Rhodes’s 143 page “Opinion Regarding Eligibility” serves as a Chapter 9 tutorial. It provides a painstakingly thorough summary of how Detroit arrived at its current disastrous state and his rationale for granting the city’s request to file. We do not envy the position Judge Rhodes finds himself in the middle of for this is only the beginning of what will prove to be a long, bruising battle of a very complicated situation. A union and multiple pension systems have filed an appeal of the ruling. To borrow from John Paul Jones, the father of the U.S. Navy, the various class of creditors “have just begun to fight!”

Many of Detroit’s creditors will attempt to advance the notion that their interests are superior to all others. Judge Rhodes will have to parse through all of the legal nuances and details before approving an equitable exit plan for Detroit and its many creditors. The bottom line is obvious — there simply are insufficient funds to honor all unsecured obligations and therefore, most creditors will be forced to take less than what they are owed.

Detroit also has other outstanding debt obligations where determining payment priority may be problematical for Judge Rhodes if the city maintains its current position. Certain creditors stand on firmer ground than others regarding these claims, in our view. It is imperative any workout plan advanced by the city and approved by Judge Rhodes recognize that within this group, certain debt obligations are superior to other debts. Specifically, I am referring to Detroit’s voter approved unlimited tax general obligation bonds (UTGO) and limited tax general obligation bonds (LTGO).

Earlier this year, Detroit’s emergency manager proclaimed these debt obligations are “unsecured” and therefore would be treated similarly to all other “unsecured ” debts. His position is that voter approved UTGO and LTGO bondholders should take the same haircut as all other unsecured creditors and receive pennies on the dollar. This is a shortsighted and incorrect position, in our view.

If the city’s position on this issue remains unchanged, a key question should be addressed by Judge Rhodes as part of Detroit’s reorganization — how should general obligation debt be treated relative to other debt obligations, secured and unsecured?

Firstly, we want to make very clear that Bernardi Securities, Inc. has not traded Detroit debt for decades. Detroit has been an unfit credit for conservative bond portfolios for many years. Therefore, it has never qualified for the Bernardi Securities approved list of credits. We have no axe to grind related to Detroit, MI debt.

“The Series 2005-B Bonds are being issued for the purpose of financing the cost of certain capital projects of the City and paying costs of issuance associated with the Series 2005-B Bonds…The Bonds are full faith and credit unlimited tax general obligations of the City duly authorized by the City’s voters and secured by a pledge of the full faith and credit of the City. The City is authorized and required to by law to levy and collect ad valorem taxes without limitation as to rate or amount upon all taxable property in the City to pay the principal of and interest on the Bonds when due.”

The affirmations above are taken directly from the final official statement of the City of Detroit, Michigan Series 2005-B bond issue. Yet, the city’s emergency manager claims the issue is “unsecured”.

Years ago, voters approved a tax increase to specifically fund the issue’s debt service. Investors relied on tax levy segregation and the above security interest language in deciding to lend money to the city. Today, these taxes are being collected in sufficient amount to pay principal and interest on this bond issue. Yet, the city has decided to divert these taxes for general fund purposes.

The city’s misallocation of these funds raises issues and questions that Judge Rhodes will have to address in order for Detroit to cleanly emerge from bankruptcy. The judge’s ruling is clear that the final debt adjustment plan must treat similar creditors equally. To us, an investor in a voter approved unlimited tax general obligation bond issue is not in the same credit line as a limited tax general obligation bond holder, a certificate of participation debt holder, a note holder or the coffee vendor provided the tax collections are sufficient to cover interest and principal payments. This seems fairly obvious to us.

Perhaps, Mr. Orr will change his tactics toward bondholders given this month’s ruling and what it means for potential reduction of pension liabilities. If not, Judge Rhodes needs to exercise a degree of judicial discretion applying principles of equity in order to fashion an exit plan for the city. Emergency manager Orr’s one-size-fits-all debt holder plan is inappropriate.

Clarity is needed from the judge on numerous issues related to debt issues:

A sensible solution may be to implement a distribution waterfall structure for “unsecured” debt holders, similar to how private equity operates. Establishing a hierarchy delineating the order and priority in which funds will be distributed to various classes of debt holders will ensure that different types of investors have priority of payment compared to others.

There is a great deal for Detroit riding on its workout plan. If it does not treat UTGO and LTGO bondholders equitably it will increase its future borrowing costs. Additionally, the plan’s final details will have important repercussions for debt issues throughout Michigan. This is especially true for UTGO and LTGO bond issues for communities and school districts around the state. Perhaps, the state government will enter into the discussion now that Judge Rhodes has ruled on the filing issue. Lastly, to a lesser extent some national precedents will be established by Detroit’s court approved Chapter 9 exit plan.

It will be interesting to watch this one develop and see if Detroit turns the bond world upside down.