Since June of last year the economy has added almost 2.5 million jobs and the unemployment rate has fallen from 7.50% to 6.08%. Nonfarm payrolls have surpassed pre-crisis levels and PCE inflation readings — 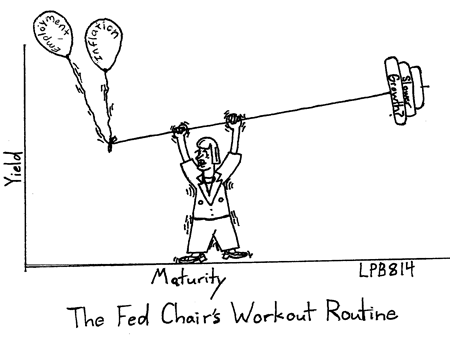 although subdued — have increased from 1.16% to 1.48%[1].  Many economists maintain a positive employment outlook as well, calling for the unemployment rate to fall to 5.8% in Q1 of 2015 and inflation to touch the Federal Reserve’s target of 2% in that same quarter.

With a healthy backdrop and positive outlook it is difficult to accept why the 10-year Treasury bond trades at a lower yield today (2.46%) than it did a year ago (2.60%). The 30-year bond has had an even larger move, going from 3.67% on July 29th, 2013 to 3.22% today. Municipal yields have moved lower too — and to an even greater extent. The effect of higher tax rates setting in, reduced supply and continuing improvement in municipal balance sheets are factors responsible for the relative move of lower municipal bond yields.

There are a number of explanations why market pundits calling for a rate shock have been disappointed. For one, investors have reduced their projections of the Federal Reserve’s “normalized”[2] federal funds rate level. Secondly, global central banks — led by the European Union, China and Japan — continue to ease as they try to keep their currency values relatively weak. A closer look at the yield curve, however, may give us the most appropriate answer for why we have experienced this fall in long-term rates. While the 10- and 30-year bond yields have dropped, shorter term rates have actually been on the rise.

The emerging theme of a flattening yield curve, which we overviewed in our March market update, has largely played out as expected. Since the start of the year, the difference in the 5-year and 10-year Treasury bonds has fallen from 1.28% to 0.77%. The 2-year/10-year spread has moved from 2.64% to a 1.94% difference. This move is in response to the market projecting slower growth in the future brought on by higher short-term rates prompted by the Fed’s eventual tightening. Should rate increases arrive sooner or greater than projected (3Q 2015), the yield curve flattening will become more pronounced, if not inverted. (i.e. higher short-term rates compared to longer-term rates.)

From a relative rate perspective, municipals offer compelling after-tax risk-adjusted returns, with the 10-year AAA rated tax-exempt benchmark municipal trading at 89% of the 10-year Treasury yield.[3] This ratio averaged 86% in the 7 years prior to the crisis. Even at the 15% Federal tax-bracket, the taxable equivalent yield is above Treasuries. The elevated level of tax-exempt rates compared to taxable Treasuries is largely due to perceived credit weakness in the market as the headlines of Puerto Rico and Detroit linger. Our own backyard — the State of Illinois — also contributes to market stress. For a “bottoms-up” research firm like ourselves, this creates opportunity. We touched on this in our Illinois Effect white paper published last month.

These pockets of distress have created opportunities and lessons alike. Detroit’s bankruptcy filing, to date, has failed to provide any legal clarity regarding the putative secured status of Unlimited Tax General Obligation bonds and Limited Tax General Obligations. Instructively, the City’s public position and certain proposed and agreed upon settlements with bond creditors have provided clarity as to how Detroit’s officials view the security of these debts. We are interested to see if the bankruptcy court finds these agreements and proposals fair and equitable with respect to each class of claims that is impaired. This opinion will provide a degree of legal clarity and it will be very instructive to us as it relates to Michigan bonded debt, generally.

Detroit’s final settlements with bondholders may portend what other investors might expect as settlement in future distress situations occurring elsewhere in Michigan. We do not necessarily infer similar treatment for non-Michigan general obligation bonds during distress scenarios, but clearly a bad precedent seems to be developing in Motor City. The market will always be regional in price, politics and legal structure. Adhering to our Three Pillars of Credit Research has allowed us to successfully navigate away from such municipal credit strains and the politics of a bankruptcy settlement.

As the year progresses we expect the economy will continue to improve. The health of the credits we follow should improve simultaneously as property values rise, tax revenues increase and pension funding recovers.

As always, please call us if you have any questions or would like a portfolio review.